With unexplored territories comes a lot of opportunities for scientific innovation

From expanding the International Space Station to creating the most comprehensive satellite system to provide internet access globally, to space tourists and travel, the global space economy overlaps more than 20 other industries and is projected to grow to over $1.1 trillion by 2040.

Our very own Susan Lucas-Conwell was invited to speak on a panel at the 24th Annual Women in Technology Summit , titled ‘Fly me to the Moon’. Joining her were female executives from highly regarded institutions JPL, and Lockheed Martin Space Systems, and Flawless Photonics who discussed the technologies powering the changing landscape of suborbital space moderated by Ioana Cuzmuta from Flawless Photonics, formerly known as NASA Ames.

From expanding the International Space Station, to creating the most comprehensive satellite system to provide internet access globally, to space tourists and travel, the global space economy overlaps more than 20 other industries and is projected to grow to over $1.1 trillion by 2040. Here’s what panellists said are some of the most interesting trends to watch for the future of space. 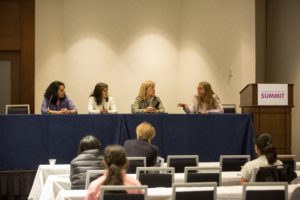 Understanding our oceans will help us better understand space

Yes, we’re talking about space but in order to understand the impact space has on our Earth, we must also consider what is happening in our oceans or on our sea floors. The two bodies are symbiotic so understanding how technologies work in one can unlock insight into how technologies will work in the other.

For example, Microsoft deployed an underwater data center in the Pacific a few years ago with a goal to deploy data centers at scale, anywhere in the world, with the ability to power on within 90 days of deployment. The success of this project was wind in the sails of several start-ups who are working on developing similar technologies to help uncover the unexplored territories of space, creating even more possibilities for creating innovative and sustainable solutions. Our partnership with Bay area company, Saildrone is revolutionizing ocean data collection. Their sophisticated sensors have the ability to measure sustain remote, harsh environments much like space, that have been difficult to measure.

Space junk is a real problem

Space has not avoided Earth’s wastefulness. What’s worse is that there are no regulations governing the disposal of junk in space. Space junk might sound innocuous enough, but it poses a real threat—especially if you’re an astronaut hanging out in space or an active satellite. In addition to safety hazards for astronauts, a cascading series of collisions could render the near-Earth orbit a no-go zone for satellites and space craft that want to get into or out of Earth.

With threats come opportunities for research, innovations and solutions. Scientists in Australia are developing cosmic guns capable of blasting some of the half-million bits of space junk into oblivion.

In 2017 we saw an increase in the detection of major astronomical events, including fast radio bursts and new galaxies. With the increase in telescope power in regions like Australia – such as the Australian Square Kilometer Array Pathfinder coming on line – these events will be captured with greater frequency, helping to paint an even richer picture of the universe.

2018 will see the greatest amount of data ever captured from space and will allow a richer understanding of Earth than ever before. This will be made possible because of the increasing rate of small satellites, called CubeSats, launched into space on an almost weekly basis.

There’s a large misconception that work in space is ‘cold’, or reserved only for government officials and scientists. In reality, space is increasingly accessible, nearly $1 billion was invested in start-ups in Q1 of this year.

In May the Australian Government announced a new Australian Space Agency and $AU 26M to fund it over four years. The aim is to further develop local space capability with a view to creating a globally competitive space industry in Australia. International engagement with countries like the US will be a key focus for the Agency.

Previous post:
Cheap, zero emission, secure energy for the world
Coming up next:
You are what you eat: innovations in our food system address climate change