Dr Alex Held of the AquaWatch Australia Mission Lead at the Centre for Earth Observation in the CSIRO Space and Astronomy Business Unit, and Dr  Neil Sims Program Manager, CSIRO Space Technology Future Science Platform, attended the 37th Annual Space Symposium in Colorado Springs in April 2022. After a 2-year hiatus from the full program, over 10,000 attendees gathered for 4 days of meetings, roundtables, presentations, and exhibitions focused on the Space sector.

Team Defence Australia hosted an Australian mission that included over 40 Australian space and defence companies with representation from CSIRO, Australian Space Agency, Austrade, DISER and DFAT. The Australian Pavilion had the largest international presence that provided the companies an opportunity to showcase Australia’s capabilities in space.

In March, the Australian government announced an almost $1.2 billion Earth Observation program that will be led by the Australian Space Agency in partnership with CSIRO, Australia’s national science agency, and Geoscience Australia, the Bureau of Meteorology and Department of Defence.

Dr Sims said, “The great value of the organic, accidental connections that can be made in-person at events such as this, which includes identifying individuals and organisations that can help facilitate CSIRO and Australia’s ambitions in the space sector for current and upcoming projects.”

Key meetings for the National Space Mission for Earth Observation were held with the Australian Minister Counsellors, trade organisations, space Primes in the technology, payload and data analytics realms. 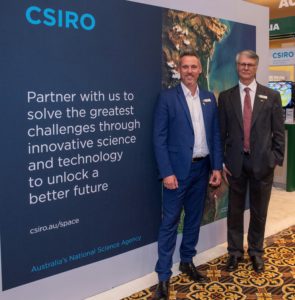