How Australian drought taught the world lessons in sustainable water

Clean technology and sustainability are going mainstream. Every person around the world is becoming increasingly aware of the impact their footprints have on neighbors, their communities and the planet. What used to be a passion for a few is becoming a way of life for most.

Clean technology and sustainability are going mainstream. Every person around the world is becoming increasingly aware of the impact their footprints have on neighbors, their communities and the planet. What used to be a passion for a few is becoming a way of life for most.

CSIRO US sponsored the Fifth Annual Women in Cleantech and Sustainability Conference on November 3rd, 2018. Hosted by Google at their Sunnyvale, CA LEED and renewable energy powered campus, the event drew speakers and attendees from around the world. Women in Cleantech and Sustainability (“WCS”) is a non-profit organization to “foster an influential network of professionals to further the roles of women in growing the green economy and making a positive impact on the environment”. While the group is focused on women, several men attended and presented reinforcing the theme of inclusion. 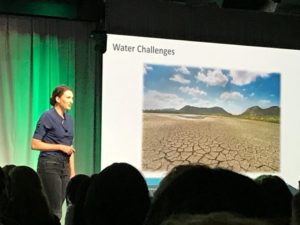 Ms. Margaret Donoghue, Director of Strategic Partnership for CSIRO US

Ms Margaret Donoghue, Director of Strategic Partnership for CSIRO US, presented to a packed audience on the lessons Australia is sharing with the world on sustainable water management. Using the 1990s millennial drought and its impact on the Murray Darling Basin as a backdrop, Donoghue talked about how global action is needed sooner rather than later. The Murray Basin covers 14 percent of Australia and is home to forty percent of all farms. Three-quarters of all Australian crops depend on water from the Basin which is also home to 35 endangered birds, fish and indigenous communities.

CSIRO, one of the worlds’ largest and most multi-disciplinary research and innovation catalyst agency led the Northern Australia Water Resource Assessment project. The Northern Australia Water Resource Assessment (NAWRA) is the most extensive integrated study of the potential for agricultural development in northern Australia. More than 100 scientists spent two and half years studying three catchment areas: the Fitzroy River catchment in WA; the Finniss, Adelaide, Mary and Wildman river catchments in NT; and the Mitchell catchment in Qld.

The Basin study was the world’s first comprehensive, wide-scale data collection and analysis of the impact of climate change on water levels. The study began by determining how much water was in the Basin along with measuring water volumes being distributed through the systems, today and forecasted for the next 30 years. The analysis included determining who was using the water, legitimately and illegitimately.

Donoghue stressed that it was only through analysis of water usage and allocation methods that the full extent of the risk to the country was understood. If the Basin dried up vital farming resources would be lost, and the capital city of Australia would lose fifty percent of its water supply.

Four Australian state governments, eighteen regional governments, a hundred associations and national universities partnered to complete this complex whole-of-basin water assessment and reach a consensus on what to do. The unprecedented collaboration between the governments, farmers, universities and associated resulted in actions that have, today, returned the Murray Darling Basis water levels to healthy levels. The fish and wildlife have returned along the waterways and while more work remains to be done in the flood ranges, the research on the Basin’s water sustainability has resulted in many best practices and tools being deployed across Australia and shared with the USA.

The results of the study are being used to guide investment and development to ensure future growth is done sustainably. Work on water sustainability has not stopped. Climate models are continually enhanced with the inclusion of new data sources such as soil samples, satellite pictures, information on shifts in soil quality and ocean currents. Donoghue wrapped up her speech with a message to the audience, “We don’t have a choice but to move forward.”

Previous post:
Water innovation is a contact sport
Coming up next:
The top five trends revolutionizing the future of digital health